Many thanks to Neue Energie for this article. 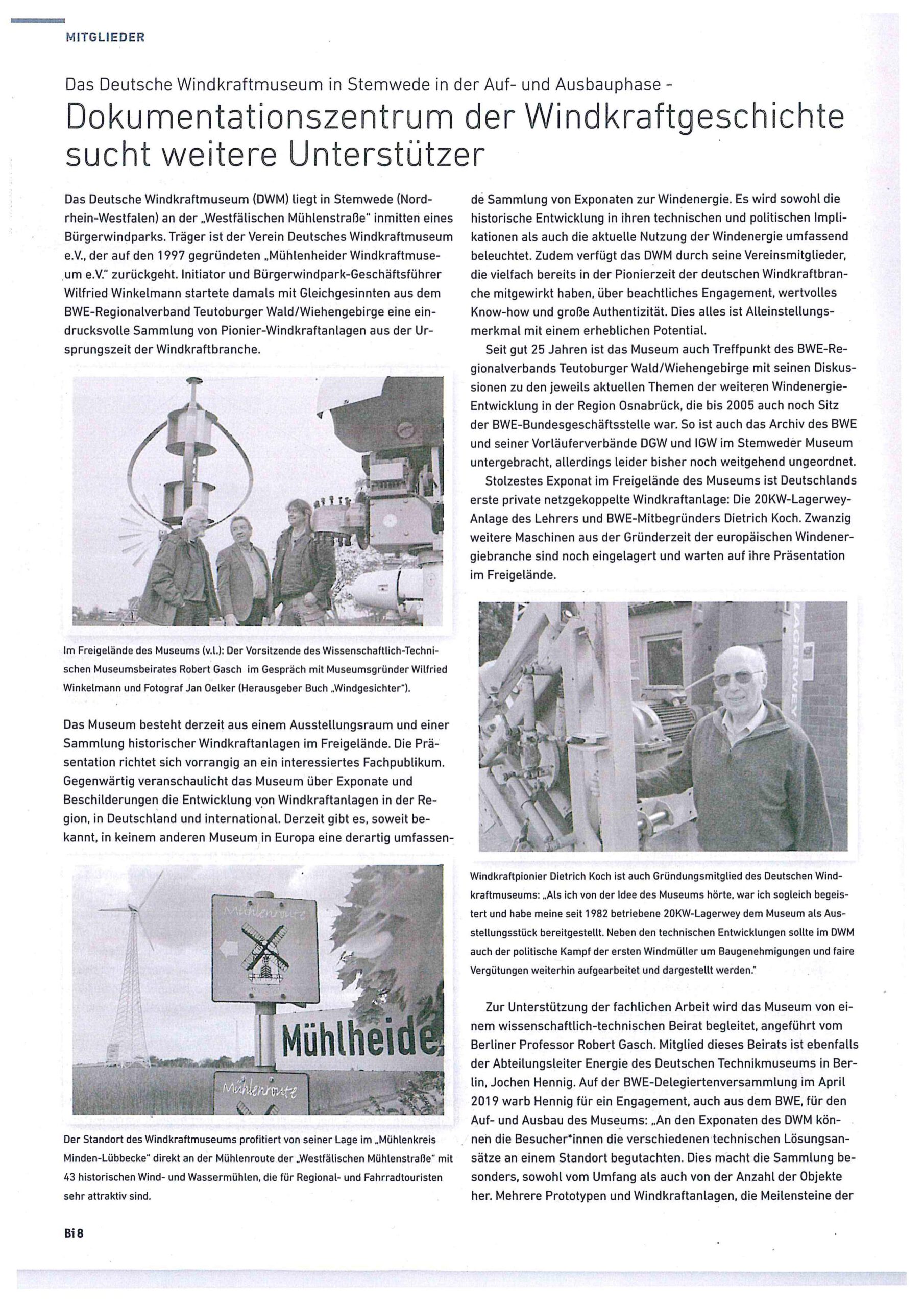 The current issue of German wind magazine Windkraft Journal features a two-page report about all recent activities of the German Windpower Museum.

At this point many thanks to Windkraft Journal! 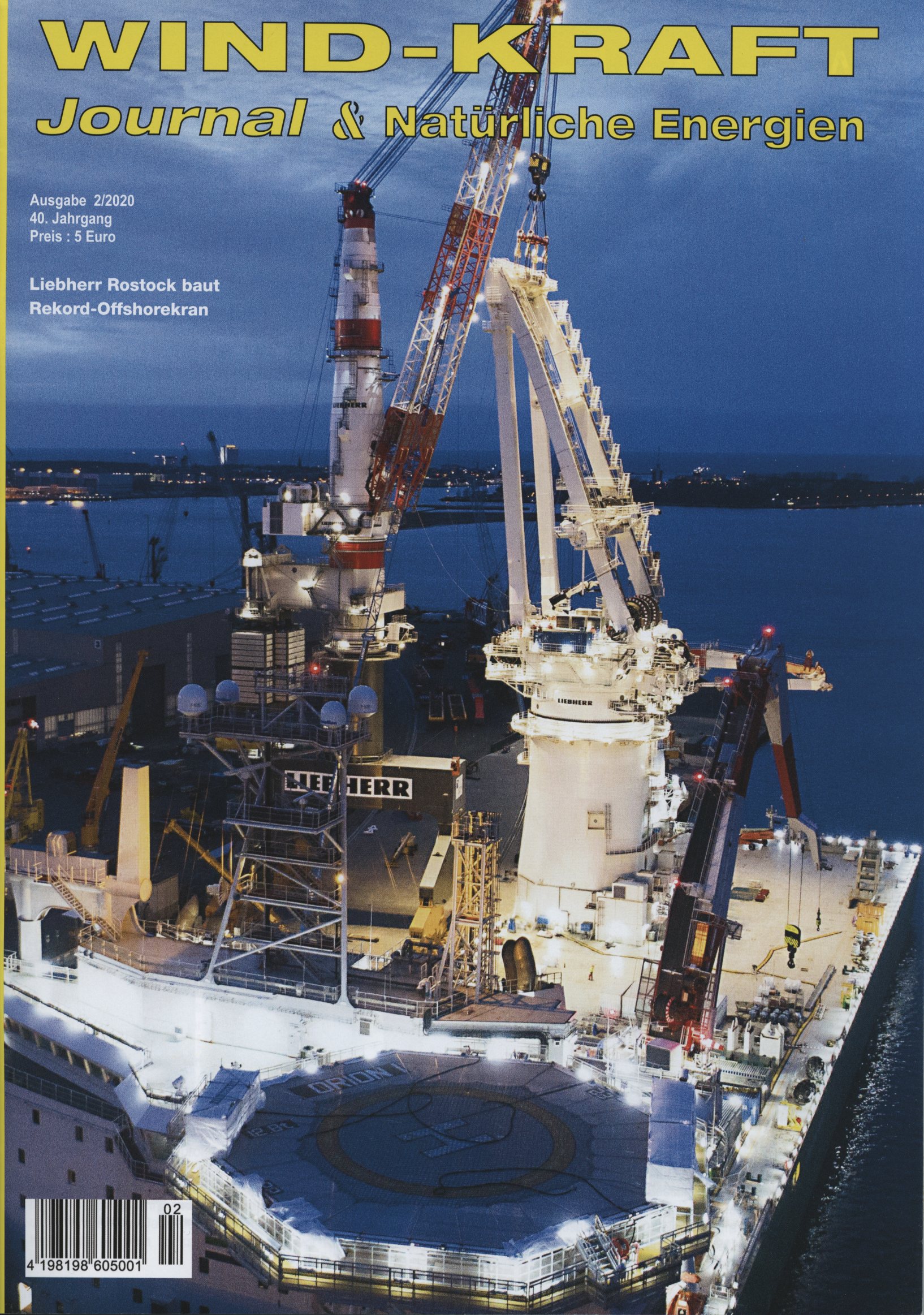 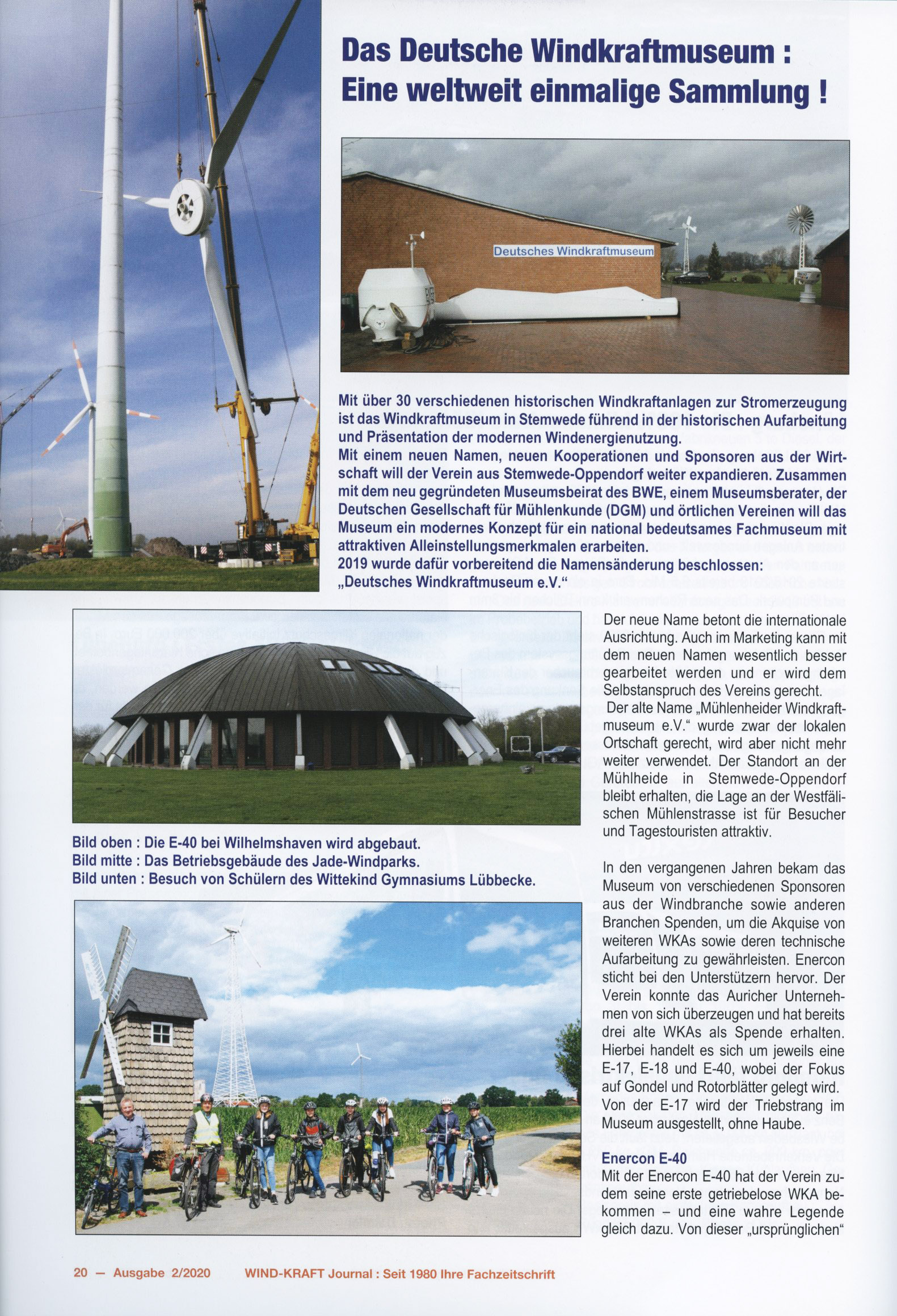 Diepholzer Kreisblatt and Westfalen Blatt (regional newspapers)  have reported about the visit of seven pupils who are part of a nature-history working group from Birger-Forell-School of Espelkamp.

Westfalen Blatt has reported about a cooperation between the German Windpower Museum (DWM) and Deutsche Gesellschaft für Mühlenkunde & Erhaltung (DGM) planned for the near future.

The following article tells all details. Article in German only.

A very rare exhibit has made its way from Lubing, Barnstorf to the German Windpower Museum. A tiny windpump from the 1960s was intensively overhauled by a Lubing employee and can now be spotted in the museum as a permanent loan. Erwin Scissek, a society member, was the initiator of this project.

Still today, Lubing wind pumps appear on meadows, farms or along dikes. In most cases it’s downwind turbines equipped with blue colored plastic blades and four or six bladed rotors. They are used for water pumping or ventilation. Especially in northern Germany these wind pumps were ubiquitous.

Thanks to Lubing for this outstanding engagement!

The building was installed in the late 1980s as part of Jade wind farm, then new and spectacular. Three single-blade turbine of type Monopteros-50 made by MBB, made up the core of the former wind farm. With a rated power of 640kW and 56m diameter they were the largest single-bladers the wind industry had ever seen.

In 1993 the Jade wind farm was extended by a 3MW two-blader. Aeolus II by Kvaerner/MBB was the fourth highly visible large-scale turbine, served as a prototype and led to even more exclusivity for the Jade wind farm..

In the previously mentioned building visitors were able to get a detailed impression and retrieve live data of all four machines. In addition to that people were informed about wind energy in general.

All wind turbines of the Jade wind farm disappeared between 2001 and 2008. Thus, keeping the existing building is of high importance.

Both sides gave a positive signal at this first meeting. GEW as well as German Windpower Museum think there’s a chance in transferring and keeping this building. Further steps are planned.

The German Windpower Museum thanks representatives of GEW for this first meeting.

The regional newspapers Westfalen Blatt and Diepholzer Kreisblatt have reported about the current developments in the German Windpower Museum. The content is mainly about the future cooperation between the club and a Berlin PR agency concerning further professionalization and increase of the degree of fame.

The German Windpower Museum thanks for the reports.

Articles in German only.

The club thanks to “Neue Energy” for this article and to BWE for its engagement.

On our own behalf

The society name „Mühlheide Windpower Museum“ is deregistered with direct effect.
All future activities concerning the windpower museum located at Mühlheide will be subject to the name
“German Windpower Museum”.
The renaming was decided within a general club meeting and is related to the national and international approach of the museum.
Site and general targets will stay the same.
For the sake of completeness older articles from the Mühlheide Windpower Museum will remain for people interested.

Right out of the headquarter of Enercon, Aurich, the drivetrain of an Enercon-17, rated at 80kW, has been delivered to Mühlenheide Windpower Museum.

The E-17 is one of Enercon’s first wind turbines of considerable success, since more than 100 units (various versions) of this series (E-17/E-18) were made. Since its market introduction in 1987 this 80kW machine was manufactured until the mid 1990s.

From a pedagogic view this drivetrain proves valuable due to the missing nacelle cover and the possibility to touch it at eye-level. All main components of a modern wind turbine can be spotted directly without a cover standing in the way.

This project required quite some organization carried out by manager Jaeger. Transporting the 5 Tons object was taken over by Mr. Nobbe from Twiehausen, who loves to support the museum.

Mühlenheide Windpower Museum cordially thanks Enercon for this donation!

We would like to give special thanks to the employees for their friendly support and a smooth process!

On the premises of the museum members of Mühlheide Windpower Museum have built an amusement house for the Oppendorf kindergarden. The installation at its final place on the premises of the kindergarden will be carried out by members of the museum on calendar week 28 and 29. Due to the massive weight of the object willingly supporters will be needed. The project was financed by local wind farm operators.

Two days ago the Mühlheide Windpower Museum became one more wind turbine richer. This time one of the first Kukate wind turbines from the early 1980s came in.

These are solid, purely mechanically running turbines in the range up to 10kW which can easily be produced by small enterprises or single persons on their own. The Kukate concept is also applicable for developing countries.

This process was made possible by manager Jaeger who personally managed the transport. The owner, Mr. Droste from Diepenau, is an active member of Mühlheide Windpower Museum and quickly agreed on the transportation of the turbine – after it got wrecked by a storm.

Club chairman Friedrich Bosse and Dr. Jochen Hennig from Deutsche Technikmuseum, Berlin presented the Mühlenheide Windpower Museum on the delegate meeting of BWE (German Windenergy Association) at hannover Fair. In front of approximately 300 invited guests the current achivements and future targets of the society were explained. The lecture got a positive response. In addition several new members were won.

Last Friday Mühlenheide Windpower Museum got a visit from Berlin and the Netherlands. Blessed with good weather Dr. Jochen Hennig from Deutsche Technikmusuem Berlin as well as renowned journalist Eize de Vries from Amersfoort did a tour through the premises of the museum. Various wind turbine types and technical developments as well as a possible future cooperation between the society and the Berlin museum were discussed.Both visitors stressed the meaningof the ever growing collection of wind turbines as well as the necessity for increased attention and support.

The recent issue of Neue Energie features a two-page report about the current developments and future projects of Mühlheide Windpower Museum.

Th society thanks Neue Energie for this report.

Few days ago an Enercon E-16 arrived at the depot of the Mühlheide Windpower Museum. The machine – rated at 55kW with a 16m rotor – stems from Norden/ East Frisia and was one out of five machines that comprised one of the first wind farms in Germany in 1987.

Even for Enercon the wind farm owned by Stadtwerke Norden (utility) was one of the first bigger orders. The same year five E-16 were placed at a wind farm in Kaiser-Wilhelm-Koog (Windenergiepark Westküste) and ten units were installed at a wind farm in Nordholz near Cuxhaven.

Thus, the club managed to save a unit from Enercon’s early beginnings and from a German pioneering wind farm – long before the EEG (energy law) came up and Enercon went into gearless wind turbine production.

Neue Energie has reported about Mühlheide Windpower Museum in its 10/2018 issue.

At this point many thanks to Neue Energie for this article.

Westfalen Blatt has made an article about our club, too.
Mühlheide Windpower Museum thanks Westfalen-Blatt for this article.

The August issue of Windpower Monthly features a four-page report describing the activities of the German Windpower Museum in detail in the English language.

One of the club’s exhibits (Trebur) made its way on the cover (left half).

Windpower Monthyl is published since 1985 and is considered to be the leading international wind energy magazine for many years.

The German Windpower Museum cordially thanks all involved for this milestone of communicating the society!
The entire article can be downloaded as PDF file:

The June issue of Windkraft Journal features a two-page article about Mühlheide Windpower Museum. Windkraft Journal, published since 1980, reports about current projects, exhibits and the numerous visitirs of the museum.

The following files can be downloaded for reading. Click the photos. 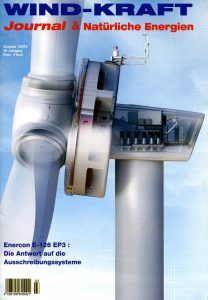 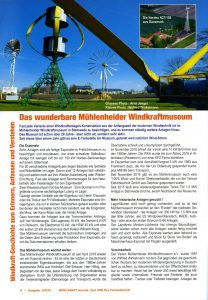 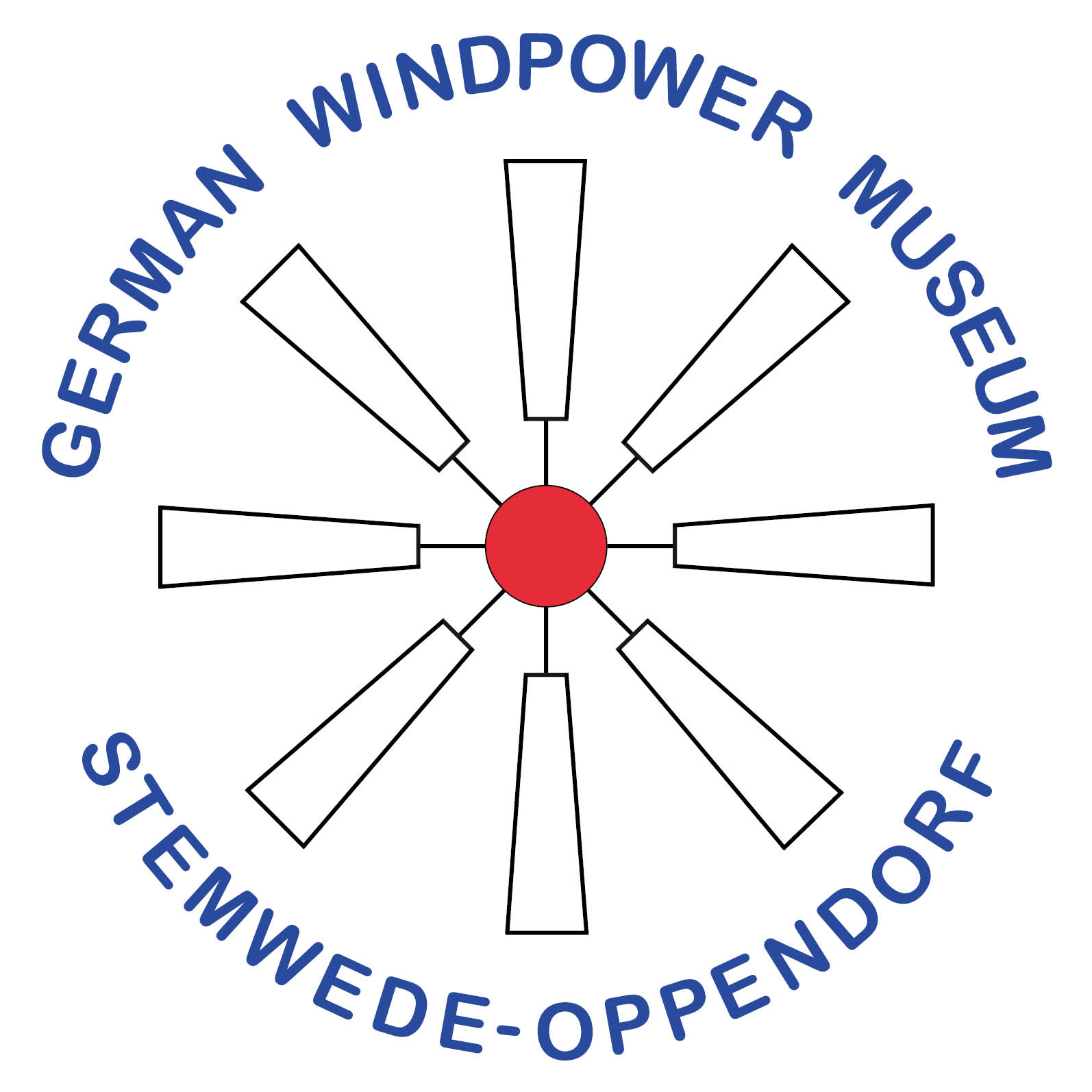