Starting last year several applications for various kinds of support on local, state and EU-level were made by some of the members of the German Windpower Museum.

One application called “Renewable Energies – digitally communicated and analysed” has now been greenlighted by the EU (Brussels) and the government of Northrhine-Westfalia (NRW).

Thus, a proper WLAN network as well as a new computer infrastructure will now be installed. For all future museum visitores this will be more than helpful in the way that content about windenergy as well as environmental education will easier be conveyed to them.

In addition guests may take part in video meetings and live experiments can be transferred to schools or universities. 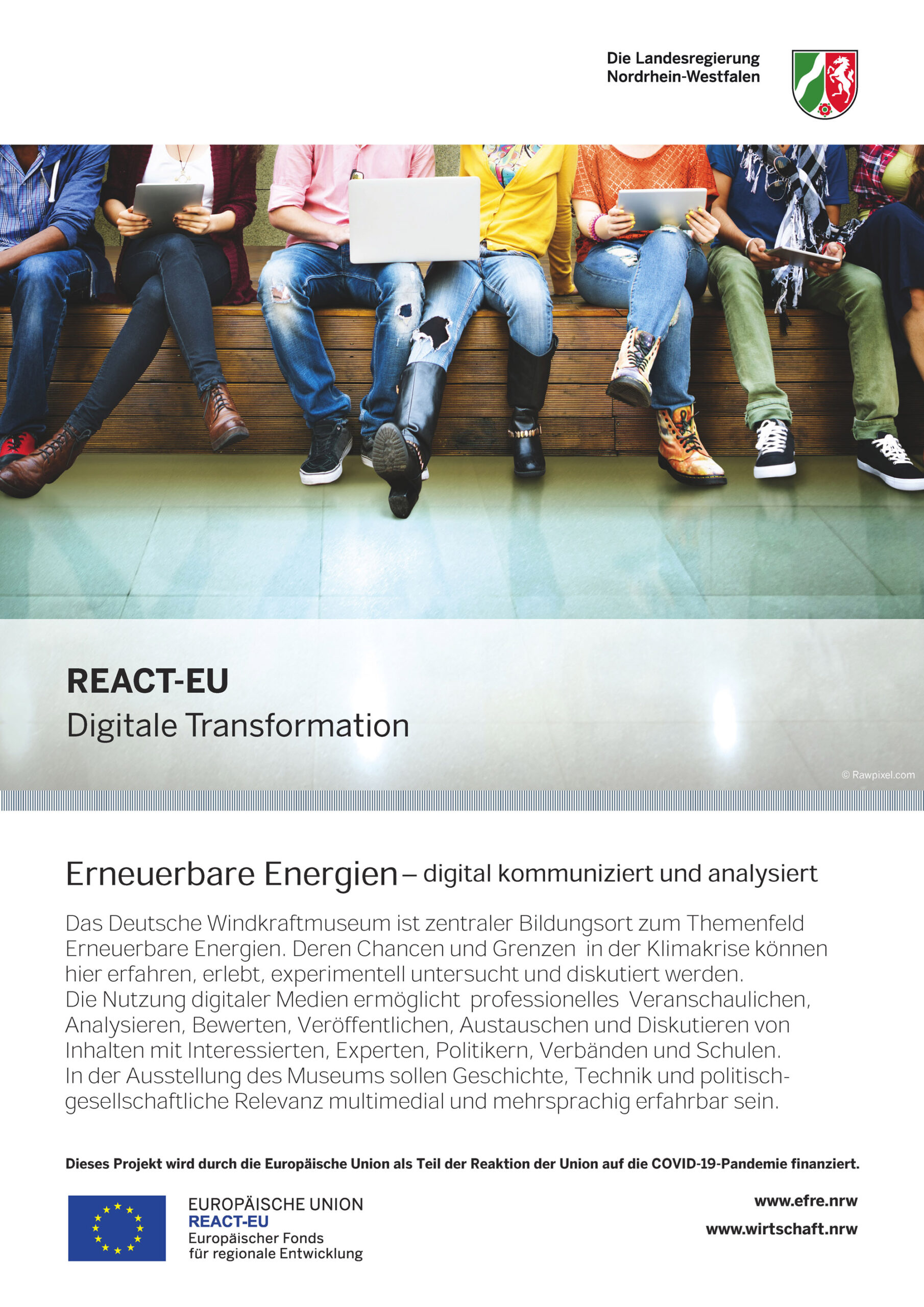 The blade of an Enercon E-20, fully made of aluminium, was prepared and loaded at the Enercon factory in Aurich and sent to the museum in Stemwede.

The 10m blade is silver/light-greyish coloured and features all the Enercon typical specialties like the Albert Betz ideal blade geometry for higher output or the folded blade tips for noise reduction.

The blade was atually designed for the small-scale machine Enercon-20 –  a 100kW turbine placed on a tube tower for application on farms, remote areas or developing countries. The machine came out as a prototype in 2007, but never went into serial production. Less than five were poduced.

Another fact is the Enercon E-20 was fully stall-controlled in contrast to the whole Enercon portfolio of the 2000s – with exception of the even smaller E-10.

The aforementioned aerodynamical features are major milestones in the technological development of Enercon and were applied thousands of timed across the world.

The “tiny” 10m aluminium blade demonstrates all these milestones “on eye-level” and hands-on.

Taking into account the progressive technology and the fact that Enercon-founder, Mr. Aloys Wobben, has recently died making an era end, the seemingly meaningless blade turns out to be of high importance.

The project was initiated by museum manager Jaeger. The transport was taken over by Wilfried Nobbe.

The German Windpower Museum cordially thanks Enercon for making this donation!

The collection of the German Windpower Museum has gotten richer by an exiting exhibit: This time it’s not about a real wind turbine or parts of it – but a big model.

To be exact it’s a Heidelberg-Motor HM-300. Contrary to almost all wind turbines this is a vertical axis wind turbine with two blades standing upright. The appearance of the rotor mirrors the letter “H” telling why these machines are usually called “H-Rotors”.

The Heidelberg-Motors got their ring generator placed either on top or at the bottom of the tower.

The model is made of balsa wood and hard paper and shows the three-leg tower version with the ring generator placed on top.

Of this extremely rare version five units were installed at Kaiser-Wilhelm-Koog (Schleswig-Holstein) in 1995 – being unique worldwide until today.

Due to technical and economial reasons the H-Rotors never really enjoyed a breakthrough on the wind turbine market. The windfarm at Kaiser-Wilhelm-Koog had to be dismantled after two years for technical reason.

However, a very rare, short yet highly interesting chapter of German wind power history is now on display in Stemwede.

The donation of the model was made by a former company employee. Organization and transport was done by manager Jaeger.

After a longer break the German Windpower Museum has  reached a new milestone on Friday 7, May 2021. With the TW 300 the first open space exhibit of the former significant German pioneer Tacke has arrived at the museum.

Nacelle, the three blades and the hub are from Athenstedt in Saxony. The turbine was installed in 1995.

Special thanks to AK Fehmarn GmbH & Co. KG for organizing the single turbine components on site as well as taking over the costs for transportation to Stemwede.

This project was made possible solely through all this engagement.

The current issue  01/2021 of Windkraft Journal features a two-pages article about the Hartkemeyer homemade turbine and its receipt by the German Windpower Museum. In addition, the two US-machines from Kenetech and Bergey are presented. The article was written by manager Jaeger.

With the arrival of an American Bergey BWC Excel the German Windpower Museum registers its second US machine.

The machine from Oklahoma is rated at 10kW at a diameter of 7m. It was imported from the US by Dutch wind turbine manufacturer LMW and installed in Belm by German manufacturer NEW in 1991.

After the turbine was removed from its site in the 2000s it was supposed to be reinstalled in Hunteburg near Bohmte (Lower Saxony). But it never happened.

Bergey is a US pioneer in the field of wind energy and active since 1977. Until today the small company produces wind turbines up to 50kW. Its machines are ubiquitious in North America. Worldwide Bergey machines can often be found in remote areas.

Kenetech 33M-VS: The first US machine at the German Windpower Museum

The first US wind turbine from earlier wind pioneer Kenetech is now on the premises of the museum.

This is the nacelle of a Kenetech 33M-VS with a rated power of 365kW and a diameter of 33m. It was originally placed in Eemshaven, the Netherlands and was one out of 94 units that made up one of Europe’s largest wind farms in 1995!

However, these machines disappeared in 2008.

Until 1993 Kenetech was called U.S. Windpower and was one of the first US companies who developed and mass produced wind turbines since the late 1970s. All in all U.S. Windpower produced more than 4000 units of which the majority was installed in the USA. U.S.W.P. made huge profits during the 1980s wind boom in California and grew to the biggest and strongest US manufacturer then.

During the 1990s the company intended to gain ground on the European market with its new 33M-VS but realized “just” two large wind farms (Netherlands, Spain) before filing for bankruptcy in 1996 and vanishing. There were plans for wind farms in Germany as well.

The German Windpower Museum receives this nacelle as a permanent loan from the German Museum of Technology of Berlin to which it holds a long time contact.

The permanent loan was made possible  due to the long time engagement of Dr. Jochen Hennig of the German Museum of Technology and Mr. Jaeger manager of the German Windpower Museum. Further common projects are in the pipe.

With the receipt of this nacelle the German Windpower Museum reaches a new milestone. On the one hand the USA as a wind power pioneering country are now represented. On the other hand it is the first machine from a different continent – abroad from Europe!

Thus, the international orientation of the museum gets a further incentive.

The German Windpower Museum cordially thanks the German Museum of technology for this permanent loan and the support that comes with it!

A very rare exhibit has made its way from Lubing, Barnstorf to the German Windpower Museum. A tiny windpump from the 1960s was intensively overhauled by a Lubing employee and can now be spotted in the museum as a permanent loan. Erwin Scissek, a society member, was the initiator of this project.

Still today, Lubing wind pumps appear on meadows, farms or along dikes. In most cases it’s downwind turbines equipped with blue colored plastic blades and four or six bladed rotors. They are used for water pumping or ventilation. Especially in northern Germany these wind pumps were ubiquitous.

Thanks to Lubing for this outstanding engagement!